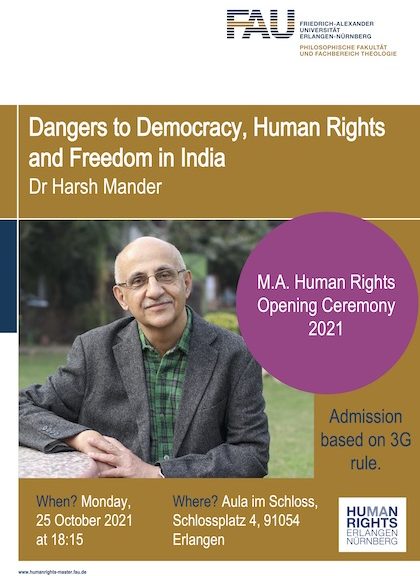 The Human Rights MA warmly invites all to the opening of the new academic year with special speaker Harsh Mander. Harsh Mander is a human rights and peace worker, writer, columnist, researcher and teacher, working with survivors of mass violence, hunger, homeless persons and street children. He is currently a Richard von Weizsäcker Fellow of the Robert Bosch Academy, Berlin, and Chairperson of the Centre for Equity Studies, Delhi.

He served as a member of the Prime Minister’s National Advisory Council from June 2010-12 and the Special Commissioner to the Supreme Court of India in the Right to Food case for twelve years from 2005-17.

Harsh Mander is the founder of Aman Biradari, a people’s campaign for a secular, peaceful, just and humane world, established after the Gujarat communal carnage of 2002. From the autumn of 2017, he established and led the important national initiative which he called the Karwan e Mohabbat, or Caravan of Love, to try to counter rising hate and fear in the country, but not with hate; instead with love and solidarity.

The opening ceremony will be held on Monday, October 25th at 18:15 in the university’s auditorium in the Schloss. Access is only for persons who are vaccinated against, have recovered from, or been negatively tested for COVID-19 (3G rule). Please have documentation ready.